Heritage Award for its work with young people. The Awards are organised by Museum

Development East Midlands and are open to museums and organisations delivering projects.

Reppin Endz has been 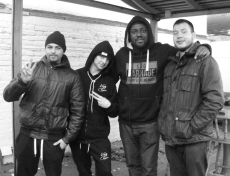 led by a steering group (image right: Will, Cizz, Karnage, Tomek) who have attended meetings and sessions, given their ideas, and given their time to make sure the project reaches young people. Huge thank you to them. Reppin Endz Derby has been shortlisted under the ‘Engaging Young People in Heritage’ category. The ceremony for 2015 will take place in Nottingham in June.

Tomek has received an Exceptional Student Award for his work on Reppin Endz Derby social media from Derby University. Tomek managed the sound cloud account which hosts the oral histories for the project, and worked to develop the audience base gaining 300+ followers. He put in a huge amount of time so it’s a big thank you to him and congratulations on the award!

Want to know more about Reppin Endz Derby? Have a look at the

funders, partners and supporters page. Want to know more about the steering group? You can read their stories here.